I Homeschool because… My Children are Twice Exceptional.

Ginny shares why homeschooling is the best choice for her twice exceptional children. 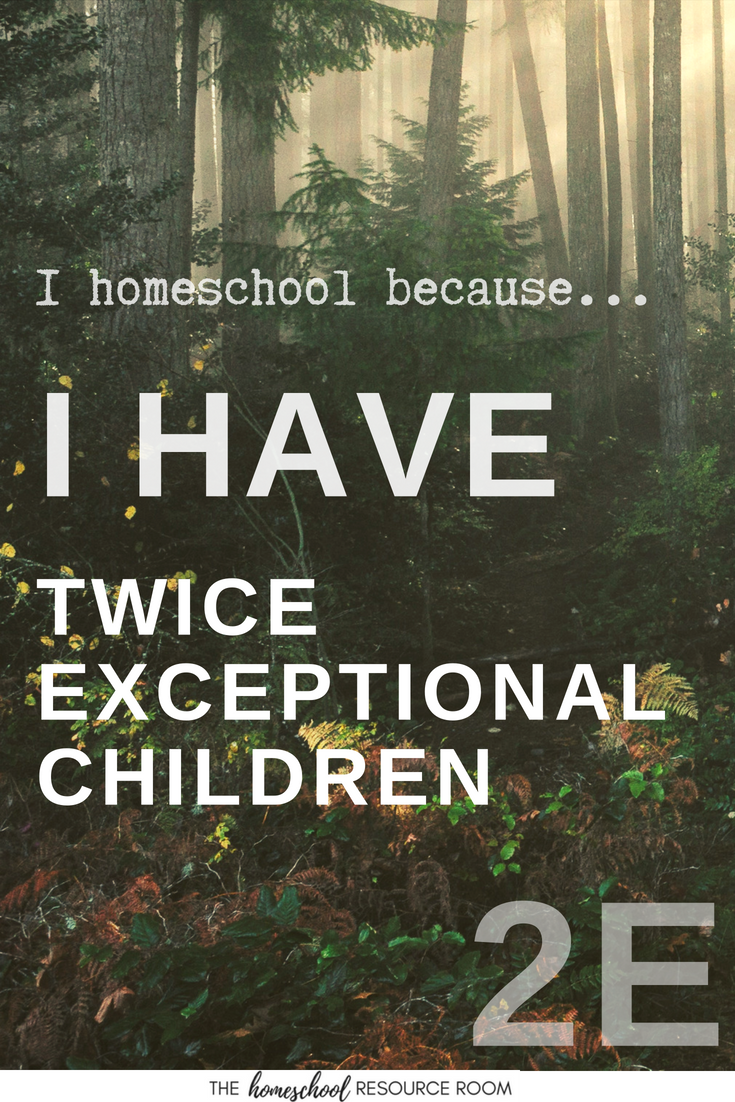 My daughter failed out of kindergarten when she was six years old. What kind of kid goes in reading at a sixth-grade level only to get unceremoniously thrown out?

Mine, it seemed, and the disaster was my fault.

If I had been a better mother she wouldn’t have had epic meltdowns.

She wouldn’t have run screaming for the front doors of the school.

She wouldn’t have hit the art teacher or her classmates or hid under tables or behind bookshelves.

She would have been the brilliant, sensitive, empathetic child I had at home instead of a first-class spoiled brat.

I carry a lot of regret over that first school year. In many ways, my decade-plus of experience in the classroom had made the situation even worse. I expected her to be high achieving – that’s what gifted means in education. Turns out I had a Twice-Exceptional, a child I didn’t even know could exist.

Despite entering the educational lexicon in the mid-1990s, the term Twice-Exceptional (2E) didn’t garner much attention until roughly 2010. Educators noted Increasing numbers of children who didn’t fit the traditional mold of gifted; brilliant, misunderstood wunderkind who couldn’t access the curriculum. Researchers began to study the phenomenon, noting that giftedness was not as straightforward as it seemed. The human brain has the capacity for both strengths and deficits.

Twice-Exceptional children are perhaps the hallmark of this discovery.

As my own parenting experience and journey toward homeschooling indicate, 2E children are a mystifying bunch. You might have an eight-year-old who blasts advanced math calculations but is stumbling through Early Reader books. Simply put, their academic experience goes far beyond Asynchronous Development, a standard characteristic of gifted kids.

In 2E children, there is a significant deficit in some portion of their learning ability. This includes, but is not limited to:

Simply put, there is no clear picture of a Twice-Exceptional child because the learning struggles are so varied. The 2E label includes any disability which impacts curricular access. I Homeschool Because I Have Twice-Exceptional Children

In the years that have passed since kindergarten, we have added two more children for a total of three. Our oldest, now 11, has sensory processing disorder. Her seven-year-old sister has anxiety. Our three year old still eats crayons and is working on potty training, but appears neurotypical at this point.

With two Twice-Exceptional children, traditional school is a bet we aren’t willing to make.

As if that one year of academic hell wasn’t destructive enough when we were in it, there have been longlasting ramifications.

I’ve burned the nights she sobbed into slumber indelibly in my memory. As a pre-teen, she still talks about how helpless and frustrated she felt.

While the school offered us an IEP and accommodations, we decided to homeschool instead. It hasn’t been easy, of course: homeschooling, in general, isn’t.

But it’s been an absolute gift to our family.

One of the struggles my oldest had in kindergarten was her inability to stop a given activity. She wanted to spend her entire today at the science discovery table, making predictions and seeing if they were right. This was highly problematic in a classroom of 25 other five and six-year-olds. Children were supposed to remain at stations for only 15 minutes – a reasonable amount of time for most kindergarten attention spans. My daughter didn’t have a standard attention span. She had incredible focus and a strong desire to learn the way she wanted to.

As you can guess, transitions were a major problem and in fact precipitated nearly every single one of her meltdowns. Once we started homeschooling, she could pursue any topic that interested her with abandon. There were no time limits or other kids waiting to take a turn.

Now yes, I realize, she needs to learn to share – and she has. She has two siblings, after all. But she doesn’t have meltdowns when it’s time to transition. She knows she can come back to something when she has the desire. She’s not under the stress of an arbitrary clock.

For my daughter with anxiety, homeschooling also relieves a great amount of stress. I know her triggers, and I can protect her from and prepare her for them. When we studied severe weather (one of her major worries), I sought out secondary resources that I knew would be less frightening than what the curriculum indicated. They have the opportunity to focus on what matters, when

2E children take asynchronous development to an extreme. For many of them, social and emotional skills are far below average. Rather than trying to navigate this in a classroom with typical children, they are able to focus on these skills separately in the safety of their own home.

My oldest, for example, is still probably about a year behind. But she loves acting and has been involved with our local art school for three years now. Her confidence has blossomed and she has a group of close-knit friends.

For my second daughter, we can stay home when her world is amiss. Some days she just needs to read a book wrapped up in her favorite pillow and blanket. She couldn’t do that if she were enrolled in a school.

We can schedule therapies much more easily

August at our favorite therapy center is a stressful time. They ask parents of school-age children to pick up scheduling forms at the front desk, indicating what their best days and times might be for therapy appointments.

Everyone needs something after 3 PM, except for us – we can make an appointment any time. In fact, we can schedule therapy for the morning before we even dive into our school work. It generally helps my girls be more centered and more ready to focus on school.

We can go grow together, gently

Whether she is 2E or not, every gifted child deals with overexcitabilities and asynchronicity. Tack on something extra to that and you’ve got a recipe for disaster. A child ends up holding herself together during the school day and falling apart when she gets home.

With homeschooling, the process is gentle. There’s no outside pressure or expectations to meet. It’s just us, and the goals we set for ourselves are attainable. I much prefer that to putting my children through an inordinate amount of stress.

A wise friend of mine once told me that with homeschooling, you reevaluate every child, every year. So far, though, it’s been a beautiful thing for our Twice Exceptional family.

It’s given my kindergarten flunky some pretty amazing wings. Ginny Kochis is a homeschool mom of three gifted/2E children. Formerly a high school English teacher and adjunct professor of developmental English, Ginny now writes about faith, homeschooling, and gifted/2E parenting on her blog, Not So Formulaic. If you’d like to connect, you can find Ginny on Facebook, Instagram, and Pinterest.

5 replies on “I Homeschool because… My Children are Twice Exceptional.”