Reasons to Homeschool – What’s Yours?

There are so many reasons to homeschool – perhaps as many unique reasons as there are homeschool families. I’m excited to share stories from homeschool moms – my readers and friends, as well as several well known bloggers that you might recognize.

This is the first in a 10 post series that shares the many reasons we homeschool. 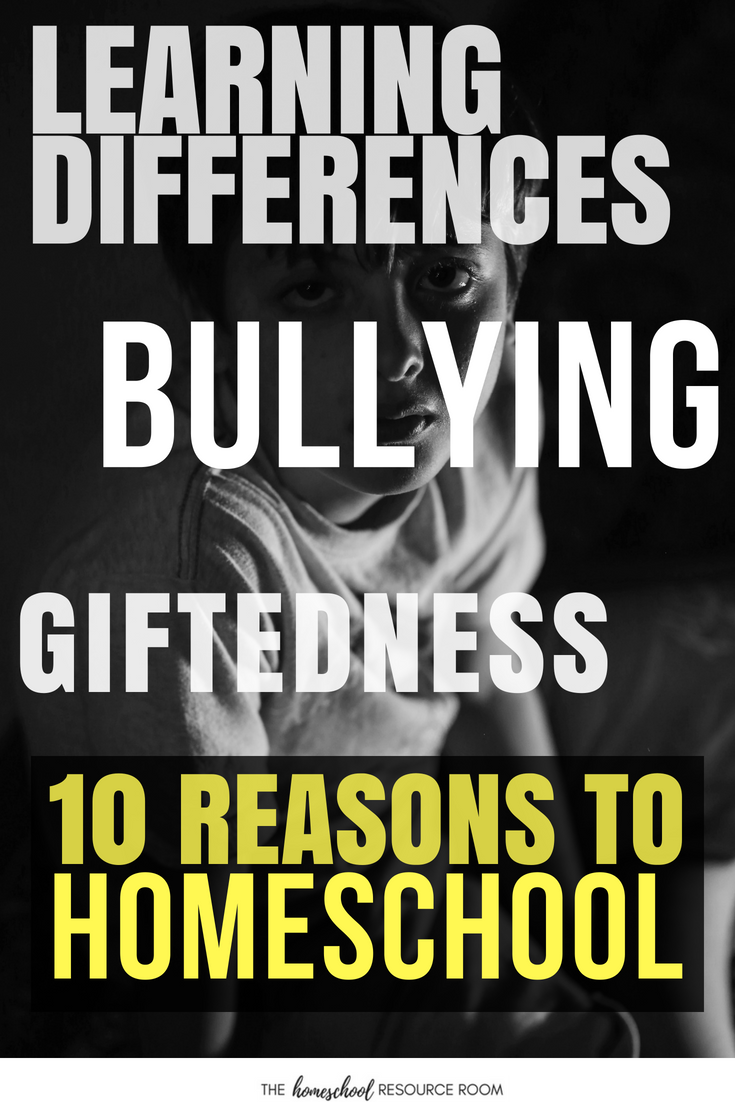 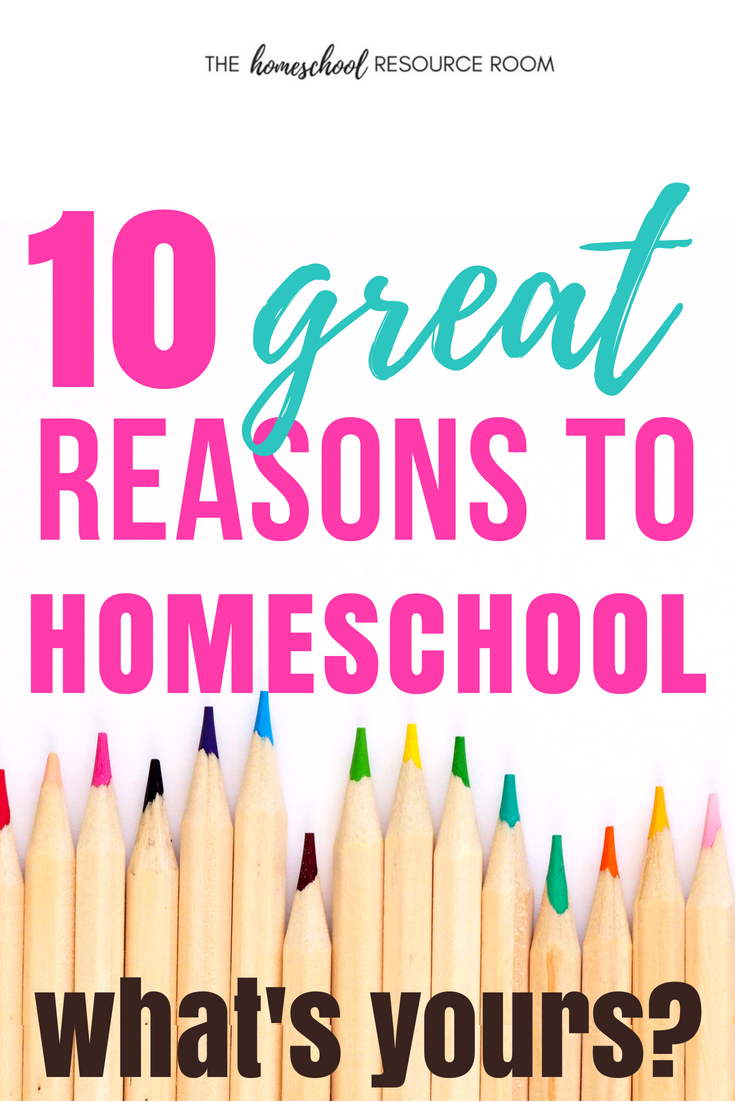 Reasons to Homeschool – What’s Yours?

The post on this site about why we homeschool is one of my most popular posts. I don’t know if it’s my long pro and con list or my snarky responses to strangers that draw the attention, but it’s something we are all interested in knowing – Why do you homeschool?

But not everyone wants to homeschool.

When I asked my readers to share their reasons to homeschool I received some heartbreaking stories in my inbox. Not everyone started out with big homeschool dreams. Many came home to teach their children because they felt like it was their only choice.

Several of my readers shared their frustration with a school system that couldn’t meet their child’s needs. Are they alone? No.

If you have a child with learning differences or special needs, I’m sure you’ve heard it – you need to be an advocate for your child. As a teacher, I was told I needed to be an advocate, too. Why? Because there is a constant battle to get individual needs met.

In her article about homeschooling with learning differences, Kim writes:

“We had a great first-grade experience, but in second grade it became apparent that the school wasn’t going to provide the additional support he needed. Kids with dyslexia often fall through the crack in public school.“

I.E.P.s (individualized education plans) are written to address the individual needs of kids with differences but are difficult to realize on a daily basis. This is incredibly frustrating for teachers who want to help their students but feel they have their hands tied.

I personally have gone to meetings where I’ve had to explain to parents that, no, services weren’t being delivered on a consistent basis. Why? We are short staffed. Someone was sick. Administrators sent your child’s tutor to cover lunch duty. That position has been cut and we aren’t sure who will be the replacement. No one showed up. etc. etc. etc.

Teachers bear the brunt of a system that promises an individualized education, but delivers a standardized version instead. Teachers are constantly pleading for more help in the classroom and trying to advocate for their students – to get systems in place that do address each child’s needs. But teachers are also expected to defend administration and make excuses to parents as to why their boss isn’t following through.

It’s always something, amirite? I can only imagine what it’s like to be on the other side of that table.

Eva from Eva Interrupted shares her struggles with a school system that failed to meet her child’s needs:

“We homeschool because I knew from the moment I became a mom 18 years ago I wanted to educate my kids. I saw after my struggles in the public school system that I never wanted that for my kids. Sadly I ended up being a single mom for many years and I didn’t have a choice other than to enroll my older kids.
They both spent many years on ieps that weren’t followed, being misunderstood, and pushed through the system heartbreaking doesn’t begin to cover it. Fast forward to high school and I finally married a wonderful man who supported my ideas and dreams.
I can now proudly say we homeschool so our kids can learn the best way for them, so we can spend more time learning life skills and spending time as a family. So my kids feel supported and understood and they can thrive. I wouldn’t have it any other way.

Reasons to Homeschool: My Child is Gifted

But what about the other side of the coin?

One of the stereotypes of homeschooling is that we think our children are “too good” for public school. That parents of homeschoolers all have dreams of raising their own Doogie Howsers – graduating medical school before they can drive.

I just laughed a diet coke through my nose as I wrote that. This could not be further from the truth, but it’s straight-up what people think.

Have you ever talked to a parent of a gifted child? They are exhausted. They have a constant headache because their child (or children) have been talking to them about the same subject for the last sixteen hours. Raising a gifted child is no joke, and educating one can be complicated.

Not all gifted children are academically advanced. The public perception of gifted children is the Straight-A Poindexter, but that is infrequently the case. There are different types of giftedness – and even children with a combination giftedness and learning differences, often called twice exceptional.

Gifted children are frequently ignored in our public school systems. Think about it: funding is largely based on the progress of the lowest 30% + instructional materials are largely aimed at the middle. Who addresses the needs of gifted children? Often no one.

Parents of gifted children are told to be advocates, too. But many schools don’t have programs to offer. Seventeen of fifty US states don’t fund gifted programming at all – even in states mandated to offer gifted programs (Davidson Institute).

This means many teachers are never trained to address the needs of their gifted students. They may never be identified or offered any assistance at all – even when it’s clear to a parent that their child needs something more than a general classroom experience.

“My daughter was identified as ‘gifted’ in kindergarten. It wasn’t any surprise because she started reading when she was 3. At first it was great. They had her taking reading and math with the first grade class down the hall and the rest of the day in kindergarten.

Then in first grade a new principal came in and changed all the rules. My daughter was put in a regular first grade class and had to do all the same math and reading again. I was told there was no other option. Same homework and everything. She was bored to tears and started having a lot of other problems at school. She would cry all the way to school every morning…”

As a parent to a gifted child and a former teacher of gifted children, I hear you. I get it. The goal was never to raise the next Doogie Howser. But frankly, they exist. Gifted children’s needs matter no less than any other child’s.

Even in the best schools children are dealing with the fear and isolation associated with bullying. The introduction of social media has moved bullying off the playground and into… well now it’s everywhere.

Another stereotype that homeschoolers get – we are trying to shelter our children. This is said with such distaste. But you know what? This one can be kinda true. Especially when it comes to bullying.

What parent wouldn’t want to take their child out of an emotionally abusive situation?

There’s only so much a school can do to prevent and stop bullying – especially if they don’t see it happening or if it’s happening off school grounds.

“Steffy” a mom of four shares her frustration when her young son was isolated and punished after bulling went unnoticed:

“…about a month in he started complaining he was being picked on. I asked the teacher about it, she said she never noticed anything. Come to find out, she had put him on an “island.”  …I got to asking around about ways to help him and came across a church based homeschool program. I finally convinced my husband, then came to hate the school. It had many issues. Unorganized, lack of supervision, bullying was worse, I could go on and on about the problems. So I started researching if I could do this on my own, after about a month in this school. I pulled them out and have been doing a lot better at unschooling.”

This is only the tip of the iceburg. Familes homeschool for a multitude of reasons. I’d like to invite you to check out the full series “I Homeschool Because…” Maybe you can relate.

I’m excited to share a series of articles by some fantastic homeschool moms. Each will share their reasons to homeschool. Can you relate?

Tell me, what are your reasons for homeschooling? Comment in the notes below or join the discussion in our Facebook group.

17 replies on “Reasons to Homeschool – What’s Yours?”